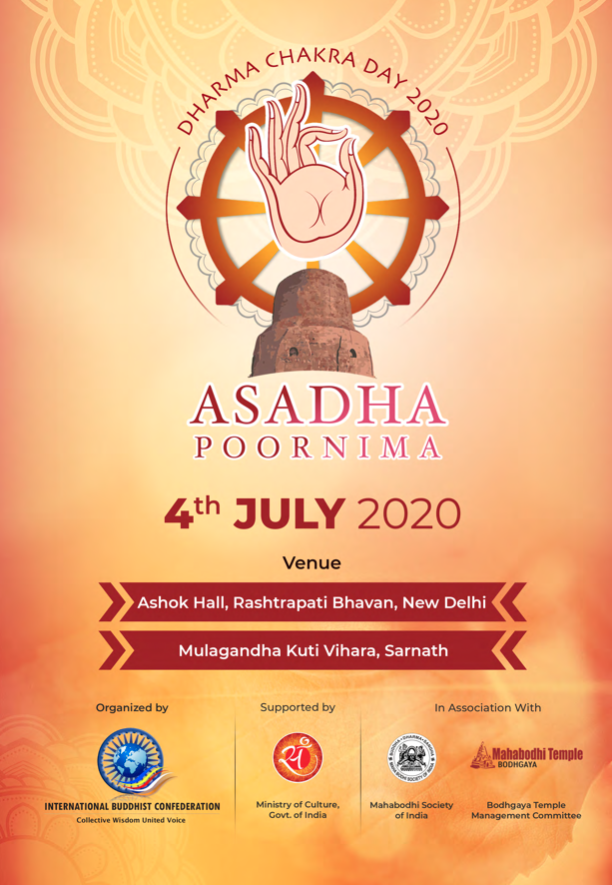 Dharamshala: The International Buddhist Confederation based in Delhi is marking the forthcoming Asadha Poornima on July 4, 2020, as Dharma Chakra Day to commemorate Budha’s first turning of wheels of Dharma.

In a show of support and appreciation to IBC’s flagship event, the Department of Religion and Culture, CTA also a member of the IBC, has invited Tibetan Buddhists and those interested to participate in the dharma Chakra Day celebrations through a special circular. Read the circular here.

Due to prevailing COVID-19 pandemic, the event will be held under strict adherence of norms and regulations as both virtual and from the sacred Buddhist sites.

The sacred ceremonies and prayers to be performed on the day will be live-streamed (www.ibcworld.org)  from the holiest sites of Mulagandhakuti Vihara temple Sarnath, the Mahabodhi Temple, Both Gaya (India), Gandan Tegchenling monastery (Mongolia). In addition, the exposition of sacred Buddha relics and chanting of Dhamma Cakka Pavattana Sutta in both the Theravada and Mahayana traditions from several countries around the world will also be live-streamed.

After a very successful hosting of Virtual Vesak and Global Prayer Week from May 7-16, 2020, the International Buddhist Confederation (IBC) is now embarking on to celebrate the forthcoming Asadha Poornima on July 4, 2020 as Dharma Chakra Day. It will be the annual flagship event of IBC.

In keeping with the historical legacy of India being the land of Buddha’s enlightenment awakening, his turning of the wheels of Dhamma, and Mahaparinirvana, His Excellency the President of India, Shri Ram Nath Kovind will inaugurate the Dhamma Chakra Day from the hallowed precincts of Ashok Hall of the Rashtrapati Bhavan, New Delhi. The Hon’ble Prime Minister of India and the President of Mongolia may also deliver a special address on the occasion.

Royalties, Supreme heads of the Buddhist Sanghas and Eminent Masters and Scholars from around the world and IBC chapters, member organizations are participating.

The auspicious day of Asadha Poornima which falls on the first full moon day of the month of Asadha as per Indian sun calendar is also known as Esala Poya in Sri Lanka and Asanha Bucha in Thailand. It is the second most sacred day for Buddhists after the Buddha Poornima or Vesak.

The day marks Buddha’s first teaching after attaining Enlightenment to the first five ascetic disciples (pañcavargika) on the full-moon day of Asadha at ‘Deer Park’, Ṛiṣipatana in the current day Sarnath, near Varanasi, India. This teaching of Dhamma Cakka- Pavattana Sutta (Pali) or Dharma chakra Pravartana Sutra (Sanskrit) is also known as the First Turning of Wheels of Dharma and comprised of the Four Noble Truths and Noble Eightfold Path.

The Rainy Season retreat for the Monks and Nuns i.e. the “Varsha Vassa” also starts with this T day lasting for three lunar months from July to October, during which they remain in a single place, generally in their temples dedicated to intensive meditation. They are served during this period by lay community who also observe Uposatha i.e. to observe eight precepts and meditate under the guidance of their teachers.

As the leading Buddhist world body the International Buddhist Confederation (IBC), is once again leading the collective aspirations of Dhamma followers worldwide by putting together a grand celebration to commemorate this very auspicious day.

Due to prevailing Covid-19 pandemic, the event will be held under strict adherence of norms and regulations as both virtual and from the sacred grounds treaded by footsteps of Buddha. In addition ceremonies and Chanting of Dhamma Cakka Pavattana Sutta in both the Theravada and Mahayana traditions from several countries around the world will also be live streamed. 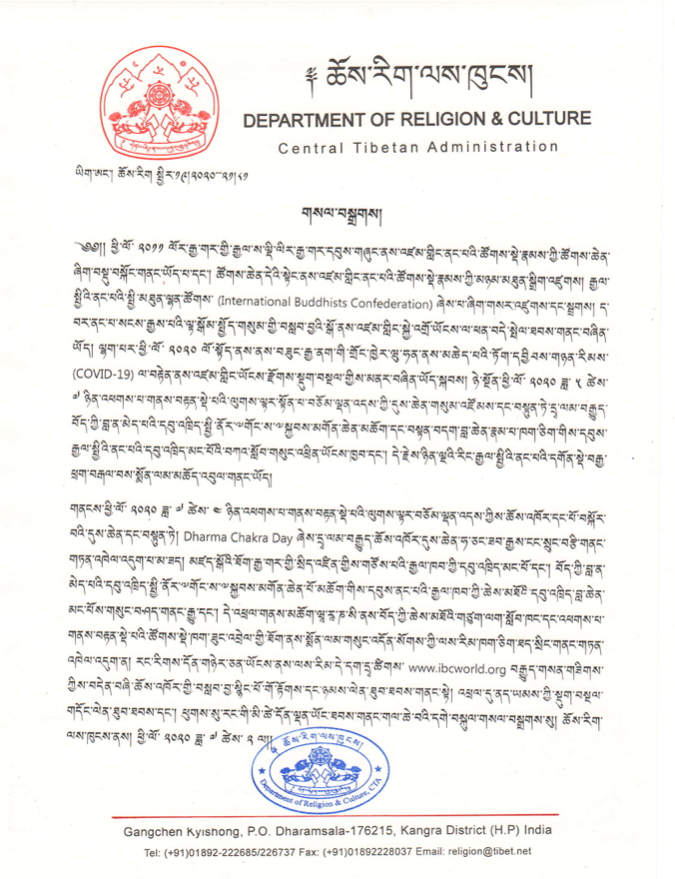