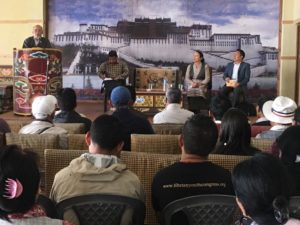 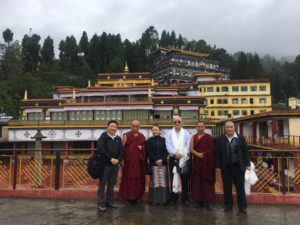 Kalon Phagpa Tsering Labrang during his visit to Rumtek monastery.

Dharamshala: Kalon Phagpa Tsering Labrang, Department of Security, CTA is on an official tour to Tibetan settlements in North Eastern of India.

Kalon on his arrival at Gangtok on 11 July was warmly welcomed by the settlement officer of Gangtok Mingyur Youdon along with chairperson of Local Tibetan Assembly, Tibetan Councillor and six Tibetan Association of Gangtok.

On 12 July, Kalon with the settlement officer and other members visited various monasteries located in Gangtok such as Ogyen Chokorling monastery, Domo Kagyon Tsechokling monastery, Sangor Choetsok and Serje Dophenling where Kalon was accorded a warm welcome reception by the representatives of the monasteries.

Later that day, Kalon addressed the Tibetans residing in Gangtok at Cholsum community hall. The public meeting was also attended by the settlement officer, along with chairperson of Local Tibetan Assembly, Tibetan Councillor and six Tibetan Association of Gangtok.

Kalon informed them about His Holiness good health and educated them on the present dire situation inside Tibet. He also talked about Kashag’s five fifty vision, the projects undertaken by other departments of CTA and particularly the Department of Security.  Kalon then answered queries put up by the people.

-Filed by the Department of Security