“The implementation of these agreements between Nepal and China could result in a clear violation of international law if Nepal were to begin to deport the Tibetan refugees back to Tibet,” International Campaign for Tibet President Matteo Mecacci said.

“Furthermore, the rumoured extradition treaty between Nepal and China, if confirmed, would put thousands of Tibetan refugees at risk of being deported in violation of the principle of ‘non-refoulment’ and would represent a serious deterioration of human rights in Nepal, as China’s legal system notoriously defies all internationally accepted standards of the rule of law and fair trials.

“We, therefore, call on Nepal to reassure the international community that it will continue to protect the Tibetan refugees who reside or arrive in its territory.” 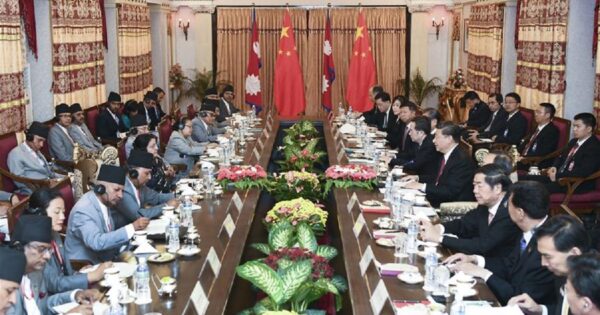 The text of the Boundary Management Agreement and the Treaty on Mutual Legal Assistance on Criminal Matters—both of which were signed during Chinese President Xi Jinping’s visit to Nepal in October 2019—reveals how these agreements could potentially endanger Tibetans, both those trying to flee to Nepal as well as those residing in the country.

According to Nepali media, details of the agreements only became known publicly after Minister of Foreign Affairs Pradeep Gyawali sent a written statement to Parliament.

Xi’s visit in October was the first by a Chinese President in more than two decades. He chose the occasion of his visit to make a graphic threat that any attempt to split China would result in “crushed bodies and bones ground to powder.” While most likely a reference to the ongoing Hong Kong protests, Xi’s comments underlined the Chinese Communist Party’s unambiguous position against “separatists” and were made in a country just across the border from Tibet.

Tibet, a historically independent country, has been brutally occupied by China since 1959. China regards any attempt by Tibetans to assert their freedom or express their unique cultural and religious identity as “separatism.”

If Nepal goes on to implement the new agreements with regard to Tibetans who have sought refuge in Nepal, it would effectively represent a reversal of its previous policy to protect them, as conveyed by Nepal’s Foreign Secretary Madhu Raman Acharya in his letter to US Sen. Dianne Feinstein, D-Calif., on Aug. 4, 2003.

Following the May 31, 2003 forced deportation of 18 Tibetan refugees from Kathmandu by Nepalese authorities working in collusion with the Chinese Embassy, Feinstein had announced the withdrawal of her support for legislation before Congress intended to provide Nepal with preferential treatment for its textile imports to the United States. In his letter, Acharya said, “Nepal will uphold the principle of non-refoulement of the refugees. Nepal will not forcibly return any asylum seekers from its soil.”

Articles 26 and 27 of the Boundary Management System agreement deal with “persons crossing the border illegally.” Article 26.2 reads, “The boundary representatives or competent authorities of both sides shall investigate the cases of persons found while crossing [the] border illegally, ascertain their identities, cross border facts and reasons as soon as possible and hand them over to the side where they stayed before crossing the border within seven days from the day when they were detained.” This provision would put at risk Tibetans who cross into the Nepali territory after escaping Chinese government repression, as they could effectively be sent back without receiving any legal protection in Nepal.

The agreement also expands on the possible use of firearms to deal with people crossing the border illegally. Article 27 states: “Before using weapons, frontier personnel shall clearly send out the warning of preparing to use weapons and fire a warning shot. Using weapons is limited to prevent unlawful action only.”

In 2006, there was a much-publicized case of a 17-year-old Tibetan nun named Kelsang Namtso who was shot dead by Chinese security forces during her escape across the Nangpa Pass to Nepal on Sept. 30, 2006.

More recently, there has been a dramatic decline in Tibetans escaping from Tibet into Nepal, due to China’s heightened security in border areas, as well as its ongoing crackdown in Tibet. While for many years there was a steady total of 2,500 to 3,500 Tibetans escaping into exile each year, the number dwindled to an unprecedented low of just 18 Tibetans in 2019.

Nepal’s human rights activists and lawyers have pointed out that the Mutual Legal Assistance in Criminal Matters Treaty could also be used to target Tibetans refugees in Nepal. Lawyer Gopal Krishna Ghimire was cited in the Nepali press as saying, “China can tell our government tomorrow that a particular Tibetan refugee has committed a crime in China and s/he should be kept under surveillance. In that case, the Tibetan refugee could be unfairly targeted.”

In light of this, a recent report that Nepal’s Ministry of Home Affairs is in the final stages of installing software with digitized information about Tibetan residents in Nepal assumes greater significance. The software installation was done with the assistance of Chinese authorities, and the compiled information will be accessible to Nepali police and, under established information-sharing agreements, almost certainly to Chinese officials too.

Nepal’s police have frequently detained Tibetans in Kathmandu for “questioning” prior to high-profile visits by Chinese officials. The police also increase surveillance in Tibetan refugee settlements during cultural celebrations like the Tibetan New Year and the Dalai Lama’s birthday.

Nepal’s ability to counter China’s oppression of Tibetans has been increasingly compromised, particularly since Nepal formally joined China’s “One Belt One Road” initiative in 2017, with promises of millions of dollars of Chinese investment in Nepali infrastructure and projects.

A strong signal of China’s heavy and deepening footprint in Nepal came with the visit of Wang Xiaohong, executive vice-minister of China’s Ministry of Public Security, to Kathmandu in December 2019. Soon thereafter, the arrests and deportations of 122 Chinese took place. Even though Nepal’s security agencies said it wasn’t a joint operation and that they only acted in coordination with Chinese authorities, some Nepali media reported that Wang was in Nepal to oversee the operation.

The deportations raised alarm among many in Kathmandu with regard to Nepal’s sovereignty and judicial independence. Laxman Lal Karna, chief whip of the Rastriya Janata Party Nepal (RJPN), was quoted by the Nepali media outlet Khabarhub as saying: “Such suspicious deportation executed without due process of the law put the sovereignty at stake.”

In the light of reported deportation of six Tibetans from Nepal in September 2019, US Reps. James McGovern, D-Mass., and Chris Smith, R-NJ, co-chairs of the Tom Lantos Human Rights Commission, and six other members of Congress wrote to Nepal’s Ambassador to US urging Nepal’s government to protect fully the human rights of Tibetans in Nepal, noting “the worrying prospect of an extradition treaty between Nepal and China, the increasingly stringent restrictions on freedom of assembly and expression suffered by Tibetans in Nepal and the essentially stateless status of many Tibetans.” For decades, many Tibetan refugees have not received a registration certificate from the Nepali government and can, therefore, more easily be denied their rights.

The Congress members also stated: “Extradition treaties can be a legitimate tool for international law enforcement, but should not be used to send people to a country where they would be at risk of serious human rights abuses. Recognizing the [People’s Republic of China’s] long-standing repression of Tibetans within its borders, we fear that an extradition treaty would be used by that government to persecute Tibetans living in Nepal.”

On Oct. 11, 2019, Sen. Robert Menendez, D-NJ, wrote a letter to Nepali Prime Minister KP Sharma Oli in response to a news report about the possible signing of an extradition treaty, stating “I strongly urge you against any additional steps toward completing such an agreement.”

The members of Congress have yet to receive a response from Nepali authorities to their letters.

The implications of the new agreements counter Oli’s assertions that economic growth and protecting people’s rights go hand in hand. In a speech at the Oxford Union in the United Kingdom on June 11, 2019, Oli said: “In Nepal’s context, the democratic values and pluralism are inherent in our own culture and they are born out of our own conscience and conviction. We have been practising them as Nepali way of life. […] People themselves are the custodians of peace. They are the defenders of democracy and champions of human rights. Therefore, democracy and its ‘bidirectional’ outcomes- peace and development – must aim at serving the people.”

Nepal is bound by international law to respect the principle of non-refoulement, which precludes states from returning a person to a place where he or she might be tortured or face persecution. The principle of non-refoulement is included in several treaties signed and ratified by Nepal, such as the Convention against Torture and Other Cruel, Inhuman or Degrading Treatment or Punishment (Article 3), General Comment No. 20 of the Human Rights Committee and General Comment No. 6 of the Committee on the Rights of the Child.