As China ramps up its repression in Tibet, US lawmakers are promoting a bill that will increase America’s support for the Tibetan people, especially on the crucial issue of selecting the next Dalai Lama.

The bipartisan Tibetan Policy and Support Act of 2019—introduced in the House on Sept. 13, 2019 by Rep. James McGovern (D-Mass.), chair of the Congressional-Executive Commission on China, and expected to be introduced in the Senate this week by the commission’s Co-Chair Sen. Marco Rubio (R-Fla.) and others—builds on the Tibetan Policy Act of 2002 (TPA), a landmark legislation that enshrined support for Tibet in US law.

The bill—labeled “H.R.4331 – To modify and reauthorize the Tibetan Policy Act of 2002, and for other purposes”—has been referred to the House Committee on Foreign Affairs and Committee on the Judiciary in the next stage in the adoption process.

The bill makes it official US policy that the succession or reincarnation of the Dalai Lama and other Tibetan Buddhist leaders are exclusively religious issues that the Tibetan Buddhist community should decide on. Under the bill, any Chinese officials who attempt to interfere in this process could be subject to targeted sanctions.

In addition, the bill says no new Chinese consulates should be allowed in the US until a US consulate is established in Lhasa, Tibet’s historical capital.

China has occupied Tibet, a historically independent country, and systematically oppressed its people for the past 60 years since it forced the Dalai Lama into exile.

Since the TPA was passed in 2002, there have been major developments on the Tibetan issue.

Dialogue between the Dalai Lama’s envoys and Chinese representatives have not been held since 2010. Also, the Dalai Lama announced his retirement from politics in 2011, fully relinquishing political authority to an elected Tibetan leadership.

The Dalai Lama also issued a landmark statement that year concerning his succession. In it, he said that the decision of whether or not to continue with the institution of the Dalai Lama after his death should be made by Tibetans and others who follow Tibetan Buddhism.

All of these developments necessitated the updating of the TPA. 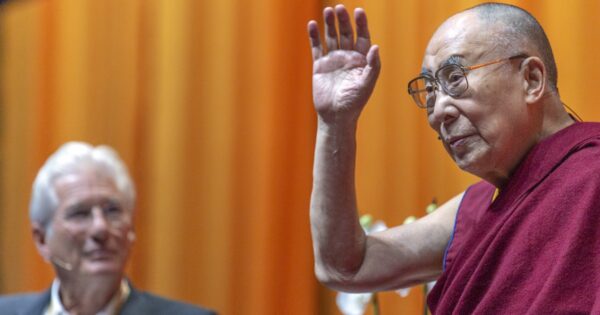 A new bill in Congress could lead to sanctions on Chinese officials who attempt to interfere in the reincarnation of the Dalai Lama, here pictured at the International Campaign for Tibet’s (ICT’s) 30th anniversary celebration in 2018 with ICT Chairman Richard Gere.

Under the new bill, any Chinese official deemed complicit in identifying or installing a future Dalai Lama will face sanctions that could include having their assets frozen and their entry to the US denied.

The bill also calls on the special coordinator for Tibetan issues in the State Department to build international diplomatic coalitions that will oppose any effort by China to interfere in the Dalai Lama’s succession.

For several years, the Chinese government has claimed that the Dalai Lama’s eventual reincarnation must comply with Chinese law—a statement that not only ignores Tibetans’ centuries-long history of selecting the Dalai Lama without foreign interference but also violates Tibetans’ fundamental right to religious freedom.

In 2011, the Dalai Lama—who relinquished his political authority and expanded the democratization of the system of government in exile—released a statement asserting that the decision of whether or not to continue with the institution of the Dalai Lama should be made by Tibetans and followers of Tibetan Buddhism. The Dalai Lama further said that only he has the authority on matters relating to his reincarnation.

The new bill also amends the International Religious Freedom Act of 1998, the Foreign Relations Authorization Act, Fiscal Years 1990 and 1991 and the National Defense Authorization Act of 2000 to include references to the reincarnation issue and the strategic importance of Tibet’s water and to require separate sections on Tibet in reports on religious freedom.

Highlighting the need for an American diplomatic presence in Tibet, the bill mandates that the Secretary of State will “not authorize the establishment in the United States of any additional consulate of the People’s Republic of China until such time as a United States consulate in Lhasa, Tibet, is established.”

The bill also says that all Tibetan areas should be under one consular district of the US Embassy in China. Currently, Tibetan affairs are handled by multiple consulates.

The bill details the democratic transformation of the Tibetan governance system in exile by the Dalai Lama and commends him “for his decision to transfer political authority to elected leaders in accordance with democratic principles.” The bill also says the Central Tibetan Administration legitimately represents and reflects the aspirations of Tibetan people around the world.

The new bill would also deepen US diplomatic support for the Tibetan people.

The bill expands the role of the special coordinator for Tibetan issues, a position in the State Department that is currently unfilled.

Under the bill, the special coordinator will have the additional responsibility of encouraging the Chinese government to address the legitimate grievances of the Tibetan people and promote Tibetans’ basic rights and religious freedom. In addition, no fewer than three people will be assigned to work in the special coordinator’s office.

Specifically, the bill updates the objectives of the Special Coordinator for Tibetan Issues to include “promote substantive dialogue without preconditions between the Government of the People’s Republic of China and the Dalai Lama or his representatives or Central Tibetan Administration representatives leading to a negotiated agreement on Tibet.”

The bill would also allow for the allocation of development assistance funds for the skilled development, entrepreneurship and cultural preservation of Tibetan exiles in South Asia and requires the secretary of state to urge the government of Nepal to provide legal documentation to long-term Tibetan residents who fled persecution in their homeland.

The bill identifies many of the major environmental crises occurring in Tibet under Chinese rule, from melting glaciers to a rate of warming more than twice the global average.

The bill acknowledges that Tibet plays an essential role in providing water to surrounding countries in Asia, meaning that a water shortage beginning in Tibet could impact the lives of more than 1 billion people.

As such, the bill requires the secretary of state to encourage a regional framework on water security and to pursue collaboration with China and international institutions to monitor the environment on the Tibetan plateau.

The secretary will also have to engage China and NGOs to encourage the participation of Tibetan nomads and other Tibetans in the development and implementation of grassland management policies in Tibet, in order to utilize their indigenous experience.

The bill also states that development projects supported by US and international financial institutions and organizations should not incentivize or facilitate the forced relocation of Tibetan nomads.

In addition, the State Department will be required to assist US companies and individuals operating in Tibet to ensure their work addresses the human rights of the Tibetan people.

Matteo Mecacci, International Campaign for Tibet (ICT) president:
“For many years, the Chinese Communist Party’s long-term strategy has been to control the eventual reincarnation of the Dalai Lama in order to try to legitimize its rule in Tibet and to gain soft power over Buddhist practitioners worldwide. This new bill from Rep. McGovern and Sen. Rubio recognizes that the Dalai Lama’s succession is essential to the Tibetan people, represents a key test for the respect of religious freedom worldwide and is therefore vital to US national interests.

As China continues its efforts to overtake the free world in global power and influence through its authoritarian model of development, this bill stands up against Beijing’s hostility and repression and rightly affirms Tibetan Buddhists’ universal right to select and venerate their religious leaders free from government interference. Furthermore, the bill introduces new key provisions aimed at protecting Tibet’s environment and rivers—whose water serves more than a billion people across Asia—at monitoring US businesses’ operations in Tibet to protect Tibetans’ rights, and at blocking any new Chinese consulate in the US until a US consulate is allowed to be opened in Lhasa.

The swift approval of the bill by the US Congress will show the Chinese government that the US considers Tibet part of its national security interest and that only a political solution that would grant Tibetans genuine autonomy could resolve this decades-long conflict.”