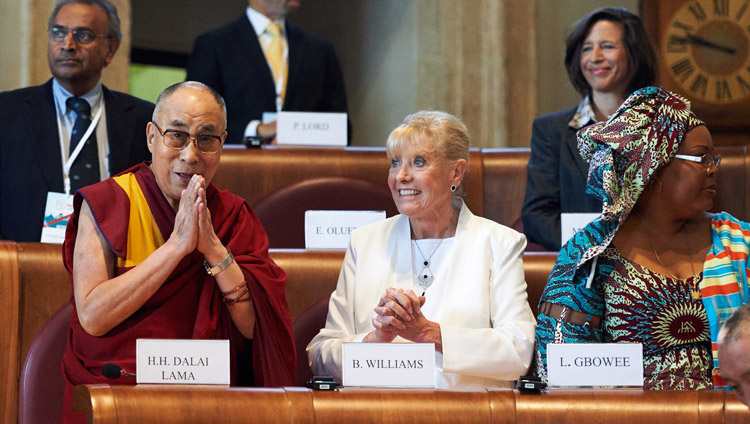 His Holiness the Dalai Lama and Betty Williams at the 14th World Summit of Peace Laureates in Rome, Italy on December 14, 2014. Photo by Olivier Adam

Dharamshala: On receiving news that Northern Irish peace campaigner Betty Williams had died in her sleep on St. Patrick’s Day, His Holiness the Dalai Lama wrote to her nephew, Lawrence Lovell, to express his condolences.

“With her death we have lost a dear friend who dedicated herself to counter the use of violence in resolving conflicts,” His Holiness wrote.

“Over the years, together with other fellow Nobel Peace Laureates, we endeavoured to promote peaceful means to the resolution of problems, through dialogue and diplomacy. Betty was resolute and forthright in pursuit of peaceful solutions, no matter how intractable the problems might have appeared. I have warm memories of our meetings on many occasions and a deep appreciation of her commitment to building a peaceful community of peoples and nations.”

His Holiness ended his letter with the suggestion that perhaps the best way to pay tribute to her would be to create peace in ourselves, with the result that our families and the communities in which we live are happy and at peace.