Abstract: Tibet has been an independent state politically and historically before its invasion by communist China in 1950. People’s Republic of China (PRC) claims Tibet as a part of China on various unfounded historical pretexts, most notably the Yuan Empire [1271-1368 CE], which ruled the eastern part of the Mongol empire. China says that it inherited Tibet from the Yuan dynasty when the Chinese Ming took over in 1368 CE. This paper will examine the relationship between Tibet and Mongol around that time to see if the Chinese claim has any substance in the matter, or is it just a propaganda gimmick to distort historical facts to satisfy their political agenda.

Mongolia was once dominated by various warring nomadic tribes and it was Genghis Khan who put Mongolia in the world map and history through his conquests. The major tribes during the time of Genghis Khan were: the Tartars in the east, the Keraits in the center, the Merkits and Ongut in the north, the Naimans in the west, Olkhunut, Bayud, Khongirad, Kirghiz, Oirats and so forth1. Genghis Khan born as Temuchin in 1162, he united these warring independent tribes and became the Great Khan. He went onto consolidate the largest contiguous empire in world history. Mongol Khanate in Russia and Europe; the Yuan empire in the present day China, Burma and Koreas in the east; Chagatai Khanate in the present day Pakistan, Afghanistan, Kirghizsthan etc.; and Ilkhanate in Persia, the present day Iran, Iraq, Turkey etc. [Map-4 of DIIR, The Mongols and Tibet] 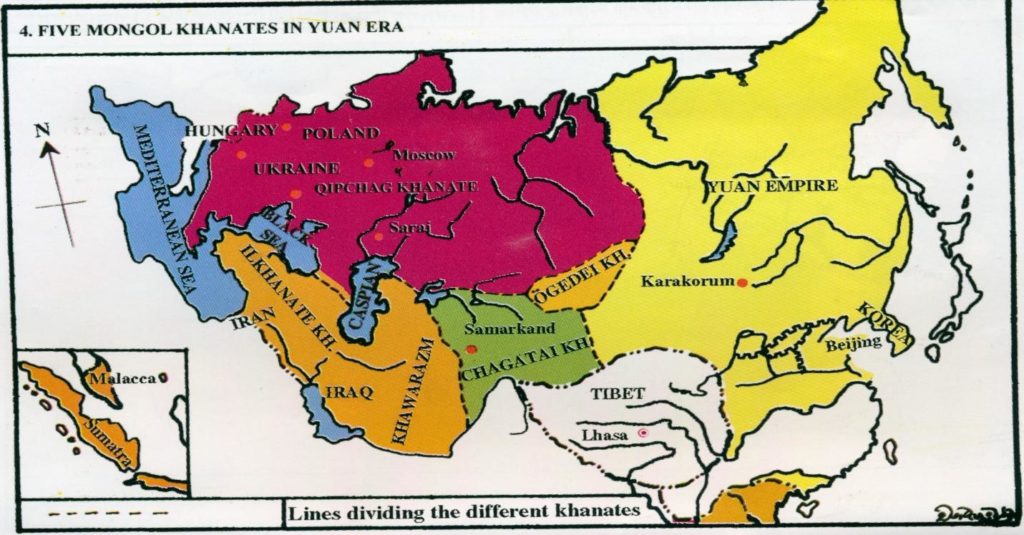 Tibet also came under the Mongol’s influence around those times and later developed a close and special relationship with the Mongol and its people. It was not a relationship of the conqueror and the conquered, of the subduer and the subdued. There emanated a unique Priest-patron [Tib: chos-yon] relationship which navigated their political and spiritual pursuits. This relationship was mutually beneficial; for the Tibetans, it gave them full autonomy and protection against any invasion; for the Mongolians, it gave their Emperors legitimacy to rule and its people a profound Buddhist philosophical teachings and moral foundation.

The Mongols came to the Tibetan border for the first time in 1207 and 1209, when Genghis Khan attacked the Tangut of Hsi Hsia Kingdom2 in the north of Tibet3. Tibet submitted to the Mongols and agreed to pay tribute and thus was spared invasion. But it was only in 1226 that Mongol finally subjugated the Tangut, Genghis Khan died the year after and Tibet stopped paying tribute to the Mongols. A Tibetan text Hor chos ‘byun, says Tibet submitted to Genghis Khan and the latter adopted Buddhism. Some scholars say this could be erroneous, Tangut is known in Tibet as Mi-nyag and the conquest of Mi-nyag was taken as conquest of Tibet4.

Prince Godan, the second son of Ogodai [the 3rd son of Genghis Khan] attacked Tibet in 1240 in which Reting monastery and Gyal Temple were destroyed, and some 500 monks and civilians were killed5. Later, Prince Godan realized that although the Mongols were powerful and strong, they lack the strong moral and spiritual civilization of Tibet. He invited Sakya Pandita Kunga Gyaltsan [1182-1251], a highly revered Buddhist master of Sakya school of Tibetan Buddhism. In 1247, Godan and Sakya Pandita met at Liangzhou, the present day Parig region of Amdo6. But this place could be the present day Wuwei city in Gansu province above the Amdo region of Tibet.

Sakya Pandita taught Godan starting with the Buddhist concept of refuge-taking, the law of Karma and generating Bodhisattva’s mind. The latter was so impressed with the teaching and he made Buddhism the State religion. As Tibet was under his influence at that time, the Prince gave Sakya Pandita temporal authority over the thirteen myriarchies [Tib: Khri ‘khor bcu gsum] of Central Tibet7.

In a letter written by Sakya Pandita to Tibetans leaders from the Mongol court, he advised everyone to accommodate the Mongol’s power and refrain from any violent action which would not be of mutual benefit. In the letter he writes toward the end:

The diverse teachers and powerful figures of China, Tibet, Uighur, Tangut etc. listen to my teachings with great appreciations. They [Mongols] respect me greatly. Have no concerns about how Mongols will treat us here. All may keep these words in mind and stay at peace8.

It is clear from the letter that China, Tibet, Uighur, Tangut etc. were distinct entities and Sakya Pandita being revered by the people of these countries was advising them out of his concern for everyone.

China has quoted the meeting between the Godan and Sakya Pandita and the latter’s note to claim Tibet as a part of China. It says:

The meeting is called the ‘Liangzhou Talk’ in history, after which the ‘Sakya Pandita’s Letter to the Tubo People’ was issued, which thus officially incorporated Tibet into Chinese territory and made it an administrative region under the central government of the Yuan Dynasty9.

The historical event of the Liangzhou Talk is a landmark moment in the history of the development of Tibet-Central Government relations. The Mongolian and Tibetan people have made significant contributions to the peaceful reunification of the motherland and the development of ethic unity10.

It is irrational on the part of China’s to claim over Tibet on the basis of the aforementioned assertion. Here it is the relationship between Mongol and Tibet, and China is only an outsider who came under Mongol rule in 1279 CE. Kublai Khan declared the establishment of the Yuan Dynasty in 1271, much before it annexed the China’s southern Sung Empire. Therefore, China’s claim on the Yuan Dynasty does not hold any ground.

Sakya Pandita, passing his religious authority to one of his nephews, Phagpa, died in 1251 in Liangzhou and Prince Godan too died in the same year.

Mongke Khan, the grandson of Genghis khan and the eldest son of Tolui took over. During his reign, the Mongol empire extended greatly in the east and as well as the west and other directions. Kublai Khan, the second son of Tolui, invited Phagpa to his capital Shangdu in Inner Mongolia. Despite the differences at the initial stage, Kublai Khan and his Queen Chabu and many of the Mongolian ministers and officials became devoted Buddhists and Buddhism further gained popularity throughout the regions. Kublai Khan gave Phagpa full authority over the three provinces of Tibet and the Sakya Lamas began to rule Tibet since 1254 CE. It was also recorded that at the request of Sakya Pandita Kublai Khan stopped the annual ritual of drowning Chinese to check the Chinese population [Tib: Gya’i me yur chen mo]11. This was all before Kublai Khan became the Great Khan of Mongolia.

Around 13th century, there was northern Jin empire and southern Sung. They were in perpetual fight over the territories. Ogodai, the third son of Genghis Khan conquered Jin empire in 1234 and started campaign to invade the southern Sung empire. It was finally in 1279 that the whole Sung Empire came under the direct rule of Kublai Khan who already has assumed the title of Yuan in 1271 to rule the eastern territories of the Mongol empire and made Beijing its capital.

What was there around that time was: Mongolia, East Turkestan, Tibet, Tangut, Dali, Jin, Sung, Korea, Burma, Vietnam, etc. They all came under the influence of Mongol empire, the Yuan dynasty. Historical map around that period may give better picture about what China we are all talking about. [DIIR map-3, The Mongols and Tibet] 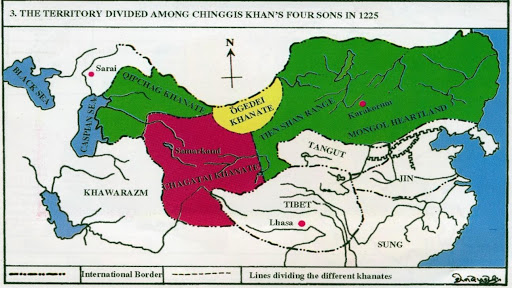 There is no denying the fact that Tibet came under Mongol’s sphere of influence at different period of its history. But it was a very special relationship of Priest-patron [Tib: Chos-yon] under Godan Khan and Kublai Khan. Mongol did not rule Tibet directly; it was left to the Tibetans only. This all happened before the establishment of Kublai Khan’s Yuan dynasty in 1271 CE to rule the Mongol’s eastern conquest. Southern Sung of China finally came under Mongol’s rule in 1279. This clearly shows that China was only a part of the conquered territories of the Yuan dynasty.

More importantly, Kublai Khan and his successors tried organizing the territories under the Yuan Empire into different provinces. This was finally achieved during the 5th Yuan Emperor Shidebala, Yingzong [r. 1321-1323], in which the Yuan empire was divided into twelve provinces for political and administrative purposes12. This map was officially published in China in 1914. It includes all the territories under their direct rules, but we don’t find Tibet in it. This goes on to say that Tibet was never considered a part of the Yuan Empire. Therefore, the Chinese assertion is doubly unfounded. [DIIR map-5, the 12 provinces of Yuan Empire] 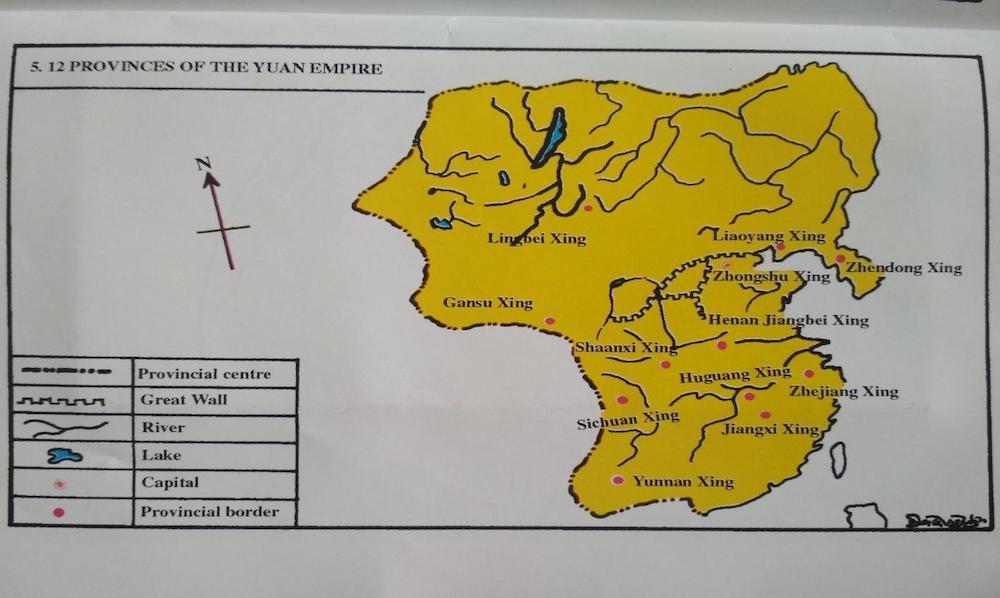 Lastly, whatever influence that Mongol held on Tibet, it was shelved in 1350 when Phagdru Jangchub Gyaltsan [r. 1350-1364] took over Tibet from the Sakya’s rule and declared Tibetan independence from any Mongol influence. China gained independence from the Mongol only in 1368, i.e. eighteen years later.

Therefore, China’s claim that Tibet was a part of China because the Yuan Dynasty is baseless and unfounded. Yuan Dynasty was a Mongol Dynasty under which Tibet, China and many other Asian nations came under its direct and indirect influence.

*Mr. Tsewang Gyalpo Arya is the Director of Tibet Policy Institute. He also holds the additional responsibility as Secretary of the Department of Information and International Relations (DIIR) of Central Tibetan Administration (CTA). This paper was presented during “Mongolia and Tibet Cultural and Religious Symposium” on 6th November 2019 at Tibet Policy Institute, Dharamsala, India. Disclaimer: The view expressed above are the author’s own.